Video:
https://vimeo.com/242005220
The game
A game ends when one player reaches 16 points. If the score is tied at 15 or greater, play continues until one player has a two-point advantage. A match consists of three wins (best of five).

Service
The players draw to decide which player serves first. Service then alternates after every three serves. Every serve counts. If the score is tied at 15:15, service alternates after each point. The serve has to be from the service zone. You let the Speeder™ drop from hip level and hit it as it falls. The losing side always has first service in the next game. 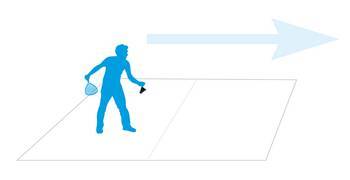 Scoring
Every volley counts unless it has to be repeated. Points are awarded in the following cases: 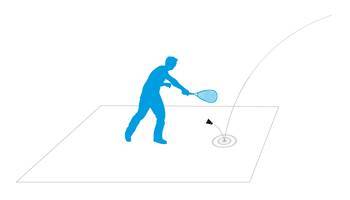 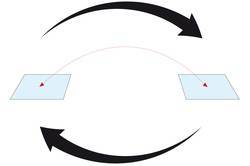 Doubles
The Doubles Match (Team A, Team B) is played as described below:
The two double team players are standing in one single court. Each double team consists of a attack and a back space player. The back space player is not allowed to position his rear foot in front of his team mate’s rear foot in the moment of hitting. This action counts as a foul and causes a point loss. The back and front positions of the team players are changing with the service changes, that means the service player is automatically in the back space position (check the service rules as described below). Counting and changeover are equal to the Single Match rules.
Double service
Drawing the lot decides which team plays the first serve. The Service Player has 3 serves in a row (cf. single rules). The service player is the back space player. The non-service team player is the attack player. The services are switching from Player A1 to Player B1 to Player A2 to Player B2. After all 4 double match players made their serves the first serve player starts again. The first serve in the next set gains the team which lost the previous set.
Official tournament rules
The official tournament rules of the International Crossminton Organisation (ICO) can be found here.
Skip back to main navigation